Hydrogen Fuel Cells work by extracting hydrogen from natural gas or other fuels and then combining the hydrogen with oxygen from the air. HFCs produce electricity, heating and cooling, and pure water. They can be up to 90% efficient when heat generated in the process is used for space heating, cooling, or industrial processes; and their ultra-low carbon footprint is good news for the environment. 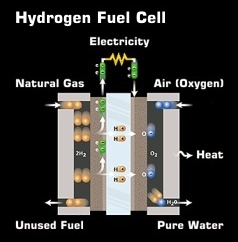 There are many options to select from, and many manufacturers including some of the largest American, Asian, and European industrial companies. 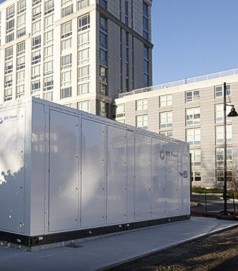 UTC Power Model 400 installation at Coca-Cola facility in Elmsford, New York. These are modular units that efficiently produce Combined Heat and Electric Power - up to 400kW each. 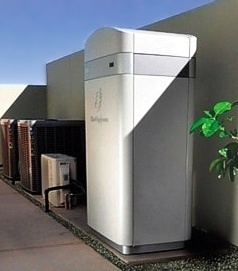 ClearEdge Power's Model 5 produces Combined Heat and Power with up to 5kW of electricity. 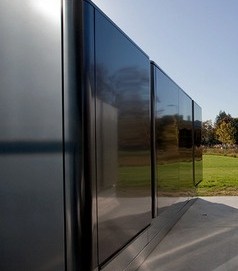 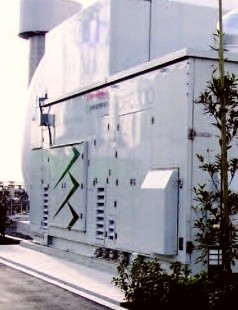 FuelCell Energy produces Combined Heat and Power with modules from 300kW to 2,800kW.

HFCs consume natural gas as their primary fuel, and are up to 90% efficient. Efficiency is the measure by which all power production systems are judged. The most efficient power plants are only about 60% efficient. Most are between 40% and 50% efficient; and most produce high levels of carbon, sulfur, and other undesirable emissions. 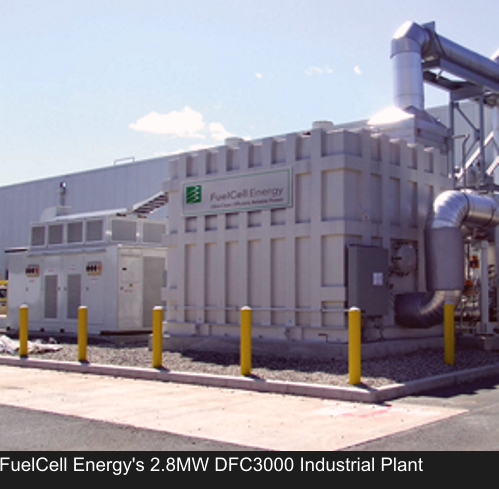 Utilities acquire electricity at power plants that may be large distances from ultimate customers using a high voltage network called the “Grid.” The Grid is both costly to maintain, and typically loses 10-20% of the power it carries do to line resistance. The net efficiency of the entire system is typically around 35%. By comparison, Hydrogen Fuel Cells are far more efficient. Without the cost of transporting electricity over long distances, the efficiency of HFCs can substantially reduce the net cost of electricity.

A key consideration in the feasibility of Hydrogen Fuel Cells is the margin between the cost of fuel (natural gas and other fuels) in comparison to the price of electricity. Hotels, offices, computer centers, manufacturing and assembly plants, as well as broadcasting, food preparation, military, and law enforcement facilities can significantly reduce their cost of operations with clean reliable electric power, heating, and cooling produced on the premises. 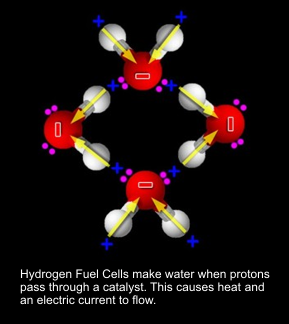 Hydrogen Fuel Cells are not only more efficient, they produce less than a tenth of the carbon emissions and even less other chemical contaminants. Electricity is produced in an electrochemical process without combustion. Hydrogen (from natural gas and other fuels) is combined with oxygen from the air in an advanced technology process that produces electricity, heat, and a small amount of pure water

By utilizing electricity and heat generated from natural gas, commercial facilities are cutting their electricity bills, as well as heating and air conditioning costs. Industrial applications of high temperature steam and hot water in processes such as baking, bottling, molding, and other industrial processes can also present advantageous financial efficiencies.

Contact us to learn more about Hydrogen Fuel Cells and other clean and cost effective energy solutions available from Koenig Technologies.

Koenig Technologies' Micro-Utilities cleanly and quietly sell natural gas, electricity, heating, air conditioning, and steam for industrial applications. As with individual fuel cell installations, the profitability of a Micro-Utility emplacement in the United States is largely determined by the retail margin between the cost of natural gas and the price of electric power delivered by the utility grid. Micro-utilities have an advantage, depending on local regulations, because they can interface directly with wholesale natural gas pipelines at "City Gate" rates. 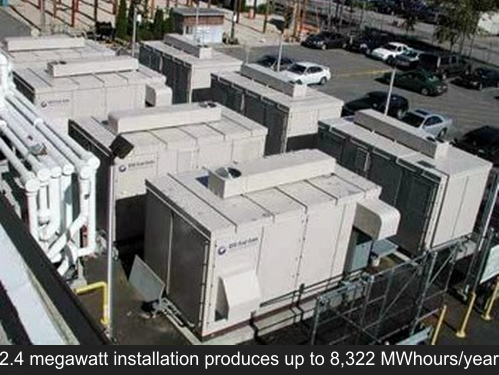 City Gate costs are significantly lower than industrial rates. In instances where the scale of operations justify additional pipeline infrastructure, Micro-Utilities can be a viable avenue to significantly improve a developer's profit while offering improved services and competitive prices to buyers and tenants.

Let us show you how we can make a cleaner, brighter, and more profitable future for you.